I once worked with an architect who was responsible for the technical direction of a major web project. When I arrived on the project it was clear that the intended architecture was not universally understood. There was some architectural documentation and wiki pages but they didn’t convey the information well and were already out of date. Team members were spending a bit too much time working in isolation, and not enough time sharing information. We really just needed to concentrate on telling and re-telling the ‘tale’ of the architecture around a whiteboard. 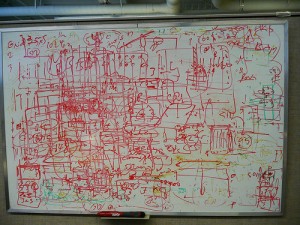 My favourite moment would come after the architect and I had spent a long time discussing the architecture and various options, sharing experiences. The board would be an unrecognisable scrawl of squiggles, smudges, and illegible text. To my astonishment the architect would grab other members of the team, drag them to the incomprehensible whiteboard and shout “SEE???!!!!”. I’d roll on the ground laughing.

It is of course obvious, but in this usage the whiteboard (or sketch paper and pen) is just a tool of communication within the conversation. A prop. The diagram left behind is completely meaningless unless you were part of that conversation.

I do a lot of ‘project-onboarding’ for new team members. I don’t tend to do this by handing them a ream of documentation. I find that handing someone a complete picture is extremely confusing. Instead we have a conversation and build up that sketch on the whiteboard. Building up that sketch incrementally – even though the resulting picture is incomprehensible – is much more effective at conveying the story of the project.

One thought on “Whiteboard architecture – SEE???!!!”

// TODO: think of a witty and intelligent tagline